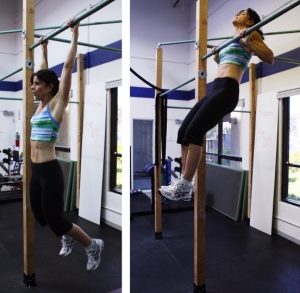 On Monday, Ivy L., David O., Melody and Ted K. fought through the day’s workout in the 7a group. As the minutes wore on, David was the last athlete working—willing his 6’5″ frame through full-range pushups. In fact, he was completing the round of 30 when everyone else had finished (sorry, Dave). All the while, Ivy cheered him on, talking him through his remaining repetitions. She was only about five minutes removed from finishing the workout herself, but when he began the round of 10, she stood next to him and they squatted that set together. When he dropped to the deck to finish those final pushups—in sets of one—Ivy dropped too, and did another 10 pushups, in step, one at a time.

Thanks to the hard work of all of our athletes, we witness plenty of impressive physical and mental efforts every day, but none have shown as much camaraderie and class as Ivy did on Monday. If you get a workout named after you—our small token of appreciation—this is how you want it done. Thank you, Ivy.

And yes, there is only one prescribed load for the deadlifts because let’s face it, Ivy out-pulls almost everyone.